Shining the light on new possibilities

Our mission is to illuminate a new segment in the food, beverage, cosmetic, and medical imaging markets with natural bioluminescence.  To do this, we have discovered, cloned, and now synthetically make bioluminescent enzymes that are completely non-toxic, and can be used for a multitude of applications.

Imagine a bathtub full of stars, an enchanted place where everything you touch begins to glow, a lollipop that lights up when you lick it.  How about a cancerous tumor that lights up to help guide treatment, or flowing blood shining using bioluminescence instead of dye through vessels highlighting potential clots.  These are just a few of the many bioluminescent applications we are developing here at BioLume.  Bioluminescence is emerging as one of the most versatile and fascinating technologies today.  The applications are limitless and the possibilities astounding.  We are the experts in bioluminescence and we are looking for partners to help us bring these products to the vast consumer and medical markets.

Bioluminescence is light produced by a chemical reaction within a living organism.  Usually two substances and Oxygen are required.  The substance that produces the light is generically called luciferin, and the substance that drives or catalyzes the reaction is called lucerifase.  The chemical reaction from combining these substances is very efficient, producing 98% of its energy as light (glow) and only 2% as heat.  One photon of light is produced for each molecule of luciferin consumed.  Luciferases perform this reaction several hundred times per second, and will continue until all the luciferin is consumed.

The specific luciferin BioLume uses is called Coelenterazine, a word derived from Coelenterates, a class of marine invertebrates that includes jellyfish, sea anemones, and corals.  Coelenterazine is the most widespread luciferin molecule found in nature.It is a very potent, natural anti-oxidant.  All of the marine organisms that emit light use different luciferases but most use the same luciferin, Coelenterazine. 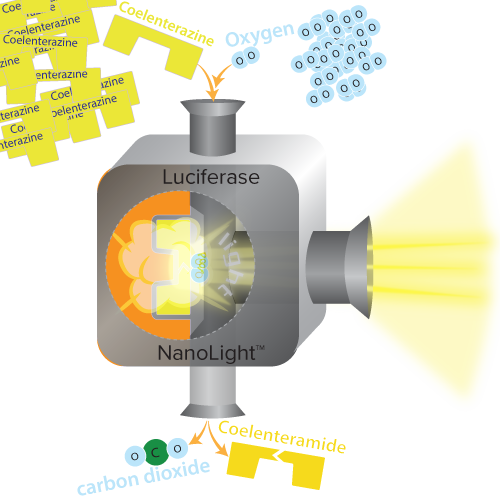 BioLume has a number of proprietary luciferases in its portfolio.  These include Renilla and Gaussia.  BioLume also has proprietary green fluorescent proteins that can be combined with luciferases to create a spectrum of glowing colors. The base color is blue.

Another kind of luciferase is called a “photoprotein” where luciferin and luciferase are bound together.  This molecule can be triggered to produce light when a particular type of ion is added to the system (usually Calcium).  Photoproteins emit a flash of very bright light for a fraction of a second for very interesting effects like twinkling stars in food and beverages.